NZDUSD is ready to soar to the previous high at 0.7200. The resistance level at 0.7200 ended the bullish rally initiated on October 13th, 2021. There was consolidation at the resistance zone, followed by a market direction change. On the 11th of November, a breakout caused the bears to swing low. The market dived rapidly, clearing previous lows with ease. The bears were in total control of the market.

The bulls’ buying pressure was noticed at 0.6710. The bearish run paused in the zone. The bullish candles marched up to 0.6850. The bulls were ready to soar to the previous high at 0.7200. Unfortunately, they were met with resistance at 0.6850. The breakout wasn’t successful. The bears drove the market impulsively to 0.6540. 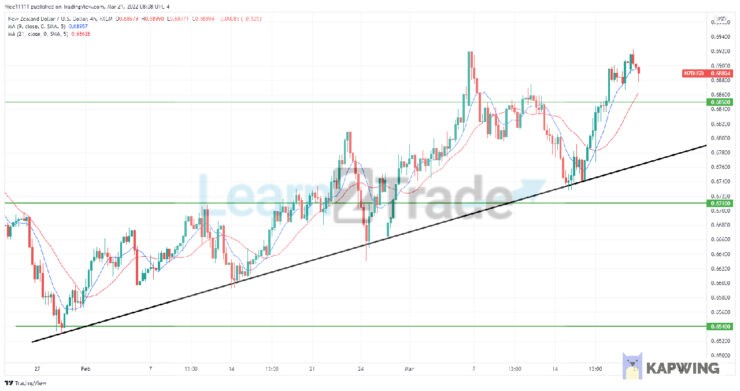 The market cleared the major resistance zone at 0.6850 on the 7th of March. The market retraced into the ascending trend line and the two Moving Averages to gain support. This has caused the resistance zone to be breached a second time. NZDUSD is ready to soar to the previous high at 0.7200. The current retracement on the four-hour chart is expected to be a retest to bring in more buyers into the market.

Polkadot Holds Above $18 Support, Poises to Revisit the $19 High Gold Is in a Sideways Trend as It Holds Above $1,800 Support